Crypto-wallets : A boon for the common man 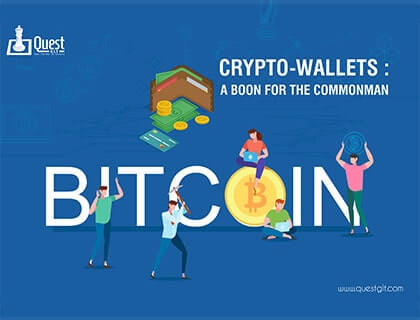 When I first started searching about cryptocurrency it created a huge confusion in my head that how the blockchain works and what is mining, etc, etc. I felt that dealing with this currency is just out of the box for me. However, when I got acquainted with the concept of digital wallets or in particular cryptocurrency wallets, it bought a relief and I thought to share how these wallets prove to be advantageous to the common man who is not interested to get into the blockchain concept and just do transactions and earn money. Also, we shall have a look at its cons and how to not fall prey to them. So, let us start with the basic question

What is a cryptocurrency wallet?

A cryptocurrency wallet is nothing but a software program which stores two keys public and private. It interacts with various blockchain which enables users to make transactions in digital currency and can also monitor their balance. So if you want to use a cryptocurrency you need to have a digital wallet. It is kind of similar to your physical wallet with some major and secure differences.

It can be broken into three categories software, hardware, and paper.

Quick hacks to secure your wallet:

5 Best wallets to use:

They are very easy to use and best for the beginners. They provide good privacy, have user-friendly UI, open source software and are free. But it comes with some cons of having less security and easily hackable, lacks good features and has no web or desktop interface. But if you are looking for a minimal amount of transaction then this is a good option.

This wallet is available for both Android and IOS users and can be downloaded free from the respective stores. They are very good to use for bitcoin transactions. These are little tough to understand for the beginners but the transactions are fairly straightforward. UI is not that attractive as the black and white colour usage makes it look dull and boring. Privacy is maintained and has advanced security features.

The best feature about this wallet is that it is a multi-currency wallet linking across multiple platforms and also it has one of the best UX design and is easy to use, it also has good privacy and freedom. Few cons are that it is not an open source code and can be slow to load. But it is the most go-to multi-currency wallet because of so many pros.

It is a hardware bitcoin wallet which has a good capacity to store a large number of bitcoins. It has a really good security and privacy. It is never affected by malware and never exposes user’s private keys. It is open source software and at the same time is beginner friendly. However, it is not free and costs $99 and must have devices to send bitcoins.

It is a multi-currency wallet and is not that expensive as compared to other hardware wallets and is cheapest among the 3 hardware wallets with screens having prices as Ledger Nano: $95, Trezor  & KeepKey: $99. They have 3rd party apps and also have U2F support. But along with pros come cons that it is not as advanced as other two hardware wallets as it has no ability to create hidden accounts and has no password manager. But it is also known for it is easiest to use with very good security.

So, above was a brief summary of wallets and how they can be beneficial to a layman. It was a detailed analysis and their usage is just a suggestion. Thus, have your own opinion as well and invest wisely.