Difference between coins and tokens 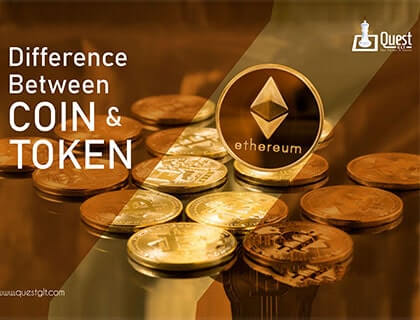 When I say the words ‘coins’ and ‘tokens’ and claim them to be two absolutely different individual entities, you might not believe me as of now but your further encounters as you proceed through the text would definitely alter the way you think about them.

COIN and TOKEN are used to describe various units of the blockchain value in the vast world of cryptocurrency. Now, what makes the difference?

Coins are intended to be used as money. It means that they are independent of any platform and are simply used as a mode of payment for services just like physical money. They are used as a store of value and a medium of transfer only. Bitcoin(BTC) and  Litecoin(LTC) are widely used crypto coins. The stored data can only be shared amongst the members of the blockchain network. They can either be sent, received or mined. They definitely are widely used as well as durable but they do have a limited supply.

Tokens are assets that are digitally issued by the projects and can be used as a mode of payment int the project’s environment. Its very existence depends on any platform like Ethereum, where they are hosted and users can create them using the core coin. It gives the possessor the right to participate in the process. Tokens may represent a company’s share or give access to their services i.e. they are multi-functional. This is the major lead they have over coins.

Although we can still buy a token using a coin. For example, when the projects launch an Initial Coin Offering(ICO),  they issue these tokens on any platform of blockchain say Ehetreum for instance and gives their investors an opportunity to buy the tokens using cryptocurrency coins.

Tokens have a particular use such as a coupon of  500 bucks issued by a clothing store can only be used to purchase clothes from that store and not to pay a bill of a restaurant. So in this case what we have is a token. On the other hand, if we have a currency note of the value 500, we can utilize according to our need as it is universal.

There is a fine line between coins and tokens as they both are a means of payment and transfer but their utilization arenas still differ a lot.