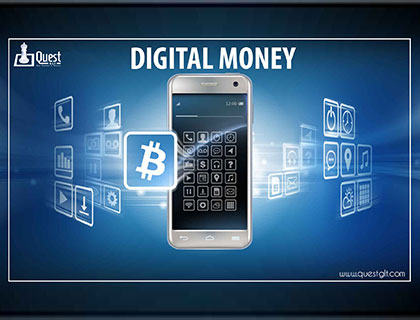 Would a person in the 30s or 40s had imagined that there would be a means of a transaction which is completely intangible yet possess immense value. Well expect the unexpected, it is here!

It sounds quite interesting but how it works is still a question. So let us dive into the answer and swim across possibilities.

First of all, it needs a medium which can be a smartphone or a laptop which has a proper internet connection. It transfers any amount of money to anywhere in the world within seconds.

One should not confuse it with net banking or e-wallets as the source of the money transferred are our bank accounts which contain tangible money.

Bitcoin, Ethereum, Ripple are some of the digital currencies widely known and used by a large amount of the world’s population. They all use the blockchain technology which is formed by decentralized networks. It is neither generated nor controlled by the banks.

Let us talk about Bitcoin, So what exactly you own when you possess a bitcoin? It is an agreement by all the computers on the bitcoin network that your bitcoin has been created by a ‘miner’ and has been handed over to you by legal transactions.

Why should we own digital money? What are the perks?

Firstly, it is easily available as it is not owned or regulated by the government or any authority in specific and so there are no shortages and delay in transactions.

Next, it is easy to store and does not burden our pockets at all. We don’t need to remember where we kept it or how much should we carry, it is always a fingertip away.

It is a profitable investment as the arena is new and so its open to multiple possibilities.

Well, there comes a baggage with everything that we need to put on our shoulders in order to pursue that thing. So these possibly could be some disadvantages of cybercash :

One cannot sell bitcoin anonymously through an exchange. It requires your social security number which if the exchange gets hacked could be extremely volatile. There is no guarantee of security as it has no governmental or formal organization involved.

One can also lose all their bitcoins in one go if their system’s hard drive gets corrupted. Even after necessary repair, the bitcoins cannot be retrieved.

It is indeed an unsolved mystery for people who know nothing about computers thus leaving a portion of the population in dark.

Since the government does not accept the Bitcoin, ther4e are no laws on theft, infringement of privacy or data loss.

As of now, the brave hearts can gamble in the vast universe of cryptocurrency and rest can all wait for security to arrive.