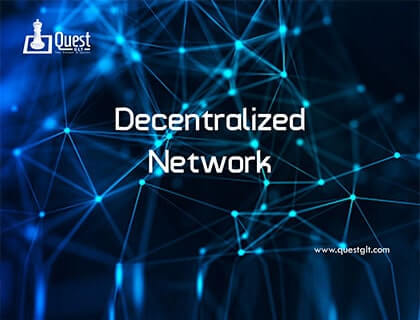 Decentralization. What exactly is this? Why are we talking about this right now?

Well, decentralization in its very literal definition is the transfer of power and responsibility from one big authority to numerous smaller ones. It requires cooperation and coordination between all its components.

The question that arises is how can decentralization be implemented in computing?

Let us start from a decentralized internet and then traverse all its applications as well as implications. A decentralized network consists of quite a large amount of local networks spread throughout the web space. It basically encloses everyone in a cloud where all the data that is being accessed flows around like cold breeze.

You might now question, isn’t the internet already decentralized?  As there is no such entity that ‘owns’ the internet. Well yes, it is, in a small practice. All thanks to Sir Lee. But there still exist a small number of big companies that mediate the internet and indirectly our lives.

Let us now understand the working of both centralized as well as decentralized networks:

A centralized network consists of a system head or server which follows the client-server model. All the data must pass through the hub in order to reach the users. Each user PC serves as a client which has negligible computing capacity. All the data gets stored in a centralized storage. This helps in reducing costs and gaining fast access and high speed on the data. There surely are a lot of benefits of the centralized network. Take the example of any messaging app that works on the internet. If it weren’t for centralization, all our emojis would be floating round and round around the network till the recipient receives it. However, centralization comes with a lot of shortcomings. It is more useful for the government authorities than to the common people. If the server faces a major breakdown and failure, the entire network falls down. Security is another major concern. These systems have centralized targets which can be more prone to break-in threats.

On the other hand, a decentralized network is widely spread over various local networks without any actual head or server. It is loosely based on peer-to-peer communication model but does not follow any network topology as such. While the much -acclaimed HBO series ‘Silicon Valley’ proposes decentralization based on a fictional compression algorithm, our real-life tech wizards used the blockchain technology to put decentralization into practical use. The benefits include low chances of system failure as there is no server and thus if one system breaks down the others function normally. Users don’t need to rely on any authority and risk their personal information.

While the uses of decentralization are visioned beyond the Bitcoin, there still is a race to run. Leading the race with a baton in hand is Ethereum. A hope that makes it way towards decentralization. Whether this cryptocurrency would make it to the next biggest breakthrough in the history of technology or not is still hazy.

At least now we know that Richard Hendricks is not really a freak.