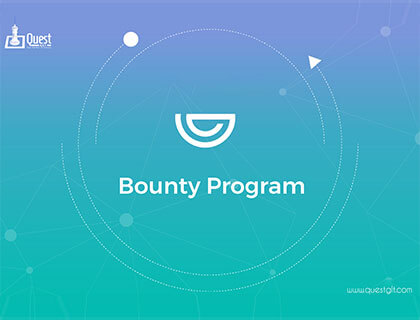 It’s a world of give and take. The relationship between the market and customer is much likely to fall in this category. Customers get rewards, gifts or any benefits on further purchases for any task they perform in favour of the product sellers. This process is called Bounty Program.

Now is the world of tech, the new age of the internet, so this Bounty has taken an all-new form. Customers get rewards for likes, shares, subscribes and more.

These programs are usually known for their bug reporting and security initiatives. Various companies like Facebook, Google, Github, and Microsoft organize their own Bounty programs. Researchers report bugs and inefficiencies and in turn get rewards. Here the bounties are a cost-efficient method of security testing. It brings up the vulnerabilities in the software which can be used for exploitation later.

In the crypto market, there also exists such a program where the ICO provides incentives to various marketing tasks. Right from promoting the ICO to the bug detection, these bounties help the organizations especially start-ups in numerous ways. The rewards may be tokens or crypto coins and in the rarest of rare cases, fiat money. There are mainly two types of Bounty in the ICO :

Pre – ICO Bounty Programs: All the efforts before the ICO are included in this section. It can be implemented using social media where the followers of the company’s account help to spread the word. Some are open to all the people that are a part of the Bitcointalk forum but then it is available to people of Jr Member rank and above only.

Post – ICO Bounty Programs: After the required amount from the Bounty has been raised, these are organized as a part of the feedback process. First, the official website and its whitepapers are translated into various languages. Then the bug reporting and testing of security are performed.

The Bounty can always be organized either before or after the ICO. It can never be conducted during or with the ICO process.

Although, organizing a Bounty is not a cakewalk. Skilled members are required to test the submitted reports. There also are many resources which sometimes the companies not possess. A lot of time and efforts go into the management and administration of these Bounties.